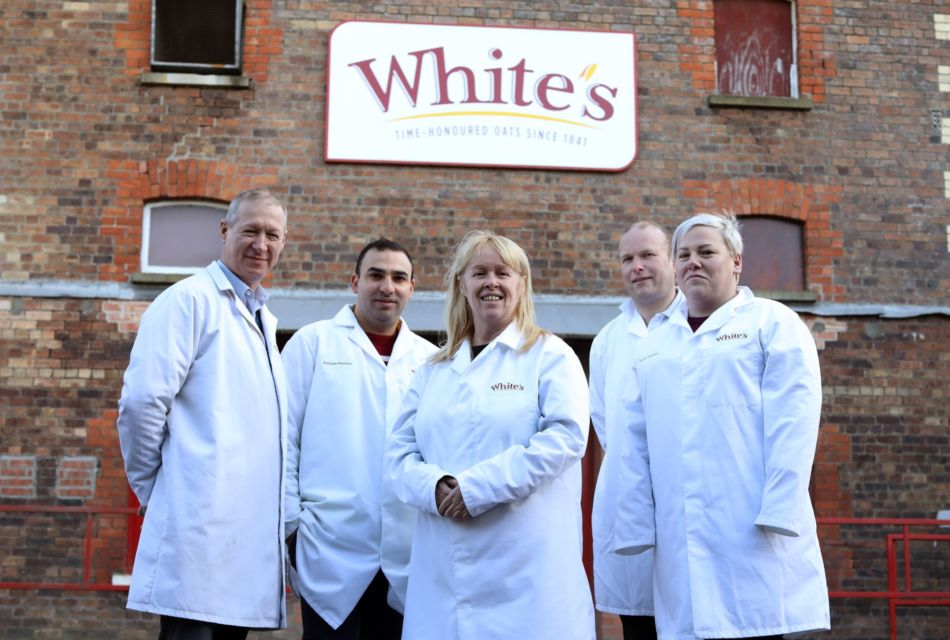 White’s, Northern Ireland’s leading Oat and Breakfast Cereal brand, has just been crowned Best Breakfast Product at the UK Quality Food and Drink Awards, the most influential event in the annual UK food and drink calendar. The awards recognise and celebrate outstanding products from UK producers. White’s boasts an impressive track record in quality having been awarded fifty three gold stars in the Guild of Fine Food’s Great Taste Awards, as well as Blas Na H’Eireann and the Irish Quality Food Awards. All of these accolades are recognition for the company’s innovative and cumulative efforts over the years to bring the best quality porridge oats and oat cereals to the market, whilst marrying consumer concerns around provenance, environment and sustainability.

Founded on a vision to innovate oat milling, the remarkable expansion of White’s into a multi award winning breakfast cereal brand is a far cry from its small beginnings. An iconic landmark of the village of Tandragee, White’s roots can be traced back as far as 1841 when the then flour mill was purchased by T.H White from Co. Waterford. T.H White had a clear vision to modernise oat milling using pioneering techniques to promote oats as a healthy and convenient consumer food, a vision that is still as relevant today. Over the course of the last 178 years, maintaining quality and high standards has been a hallmark of White’s, underpinned by provenance and supporting local farmers. In the early days farmers from across the Island would bring their oats to the mill in Tandragee and White’s is proud to say that a local supply chain is still firmly embedded in the company today. White’s, the principal organic oat miller in Great Britain and accredited by the UK Soil Association, began milling organic oats locally with growers from the North West in 1999 and since then, White’s has become the largest organic oat miller in the United Kingdom and Ireland.

White’s agronomy programme spearheaded by Sean Kane and supported by a fully traceable supply chain has forged strong relationships with local arable farmers. In addition, Sean has developed an important partnership with British organic growers, of which there are now thirty dedicated farmers growing oats for White’s.

‘’Having close relationships with our growers gives us a full understanding of their business; arable farms are diverse and work in harmony with nature and these partnerships allow us to improve oat quality whilst helping to maintain the biodiversity and sustainability of these farms. This award is a testament to our growers who produce the highest quality oats and I look forward to growing our business better together’’, said Sean Kane, White’s agronomist.

White’s is a market leading brand with a £16m turnover and employing over fifty five personnel; the company markets its products throughout Northern Ireland, Great Britain and into many export markets. It has developed significant business in recent years into United Arab Emirates as well as into Europe and other Asian markets. White’s domestic market, in which it is the brand leader within hot cereals and granolas, is immensely important and the support shown to White’s by local retailers over the years has been recognised in the growth of its business. It is particularly proud to be supplying its range of breakfast cereals into retailers across Ireland with a growing business in the UK.

Mark Gowdy, sales and marketing manager of White’s Oats  said ‘’the fact we are the largest organic oat miller in the United Kingdom and Ireland and recognised to produce such fantastic products after almost four decades of investment in the organic market, gives White’s stakeholders a solid foundation to build upon as we continue to satisfy consumer needs’’.

White’s has been investing in its branded communications to support the brand in the markets where it is sold, building on its authenticity but bringing a contemporary relevance to the brand. It has successfully executed a nationwide marketing campaign under the umbrella of ‘Taste the Journey’ to highlight the time it takes to produce quality tasting porridge oats, championing its heritage, milling expertise and ‘heroing’ its Irish and British farmers; values that remain a Key focus for the business.

Commenting, Danielle Mc Bride, brand manager of White’s Oats said ‘’our aim was to communicate the unique taste of White’s Oats in a highly distinctive way. Centred around a core message ‘You Don’t Know Oats Until You Know Ours’, the campaign aligned taste with provenance to fully engage consumers with the quality of White’s and give them a motivating reason to buy.’’.

The pioneering spirit for which White’s has become recognised continues in the company today, particularly evident in the number of new product categories and depth of range. In addition to its renowned Speedicook Porridge Oats, White’s has developed a range of instant oats, granolas and toasted oats as well as championing the development of the organic sector within the industry. Consumer concerns around plastic and White’s own commitment to sustainability has prompted further development around its packaging initiatives. In 2018 a number of its market leading brands were switched into more environmentally friendly bags. The new plastic free packaging maximises bag fill and reduces air, making the most efficient use of transport.

A delighted James Mathers, White’s General Manager commented ‘’to win the UK’s best breakfast product is a huge achievement and shines a spotlight on the tremendous efforts by all the team at White’s. Whilst we are endlessly proud of our 178 year history, as an innovator in the oats sector we don’t rest easily on our laurels, always looking ahead, innovating and producing healthy sustainable food products’’.